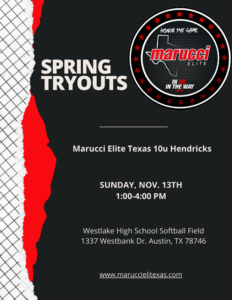 Mission and Values: We strive to develop complete baseball players using a measurable approach to physical and mental skills. We seek to align ourselves with families and players that share Marucci Elite Texas core values: Respect, Integrity, Discipline, Accountability and Hard Work. Our primary focus continues to be the development of players’ fundamental skills and knowledge of the game.

Head Coach: Coach Hendricks is entering his 17th season as a youth baseball coach with experience ranging from high school to 8u. Coach Hendricks has been a member of the ABCA since 2010. He was a member of the Central Texas High School All-Star coaching staff in 2016. Coach Hendricks played baseball collegiately at Henderson State University. He was inducted into the Athletics Hall of Honor at HSU in 2019. He continued to play professionally in independent leagues and in Europe for 8 seasons. While playing independent baseball, he was selected to the American Association All-Star Team in 2006 and was on the championship 2005 Fort Worth Cats baseball team. In Europe, he helped Hoboken Pioneers and Brasschaat Braves, Belgium win European Cup championships.

Practices: We practice 2-3 x per week starting in January in Westlake and Lake Travis.

Competition Locations: We will compete at the 10u age division at the AAA level for PG tournaments. We will play mostly around the Austin area. We will have one Houston tournament and an end of the season tournament with location TBA.